Internet opens up world of religious orders to seekers

KANSAS CITY, Kan. — Not long ago if a girl wanted to become a nun, she simply joined the religious order she was most familiar with: the Benedictines who had taught in her parish school; the Sisters of Charity, whose hospital her grandfather had stayed in; or the Ursulines, like her older cousin.

But since the Second Vatican Council — and especially the advent of the Internet age — that process has changed.

“In the ’40s and ’50s it was common to have women join our order who had been taught by Benedictines in their parish or students from our college,” said Sister Suzanne Fitzmaurice, vocations director for the Benedictine Sisters in Atchison.

So common was it for students from Benedictine College to join the order, in fact, that it was called “going South” — since the women’s monastery is on the south side of town.

Nowadays, however, vocations are less a matter of “who you know” than about who you Google — at least initially.

“Instead of looking at one or two orders they know,” said Sister Suzanne, “we see women looking at all the communities out there by searching for Web sites of different religious orders across the country.”

Along with this new abundance of information about different religious orders comes the opportunity to discover just what type of community — and charism — might best match the needs and desires of the individual.

“I think after Vatican II we started to see more discernment in what community was going to be the best fit for a woman considering religious life,” she said. “Apostolic, cloistered, monastic — each community is very different.”

From cloistered religious orders to those whose members are actively engaged in public outreach, there is an order out there for everyone.

For Sister Janel Olberding, 23, the Apostles of the Interior Life — with its focus on offering spiritual direction and evangelization through parish retreats — was a natural fit for the way she felt God was calling her to minister to people.

“I have an intense desire to share with others the same joy I experience in being with God,” said Sister Janel, whose home parish is St. Mary in St. Benedict. “In the community of the Apostles I am able to help give a spiritual formation to people — that is, bring them closer in their own relationship with God. We do this especially through spiritual direction and evangelization, focusing on the topics of prayer, sacraments and vocational discernment.”

Sister Janel is, in fact, a product of the mission and charism of her order. She first got to know the Sisters as a student at the University of Kansas, where the Apostles of the Interior Life live and provide spiritual direction to students at the St. Lawrence Catholic Campus Center. She received spiritual direction from Sister Tiziana of the Apostles of the Interior Life while a student at KU. She eventually entered the order in 2004 and took her first vows in December 2007.

For Sister Elizabeth Akins, the Ursuline Sisters’ mission of helping people to know, love and serve God through prayer and service was very appealing.

“I visited other orders and enjoyed each of them, but I really liked the balance of community prayer and outside work the Ursulines have,” said Sister Elizabeth, 54.

Prior to entering the Ursulines, Sister Elizabeth worked in the restaurant and retail industry. Because she found herself missing something, she began visiting religious orders and discerning whether God might be calling her to become a Sister.

“I was still working the late shift in retail and would find myself looking forward to visiting the Ursulines, and wondering when the next time I could go would be,” said Sister Elizabeth, who was most recently a member of Sacred Heart Parish in Ottawa.

Sister Elizabeth joined the Ursuline Sisters in 2004 and recently professed her first vows in December 2007. True to the Ursuline mission of service and prayer, Sister Elizabeth is completing a degree in religious studies at Avila University in Kansas City, Mo., and is currently doing her practicum teaching religion at Bishop Miege High School in Roeland Park.

A charism of helping the poor is one of the hallmarks of the Sisters of Charity in Leavenworth, and one that Sister Sharon Smith believes is attractive to women considering her order.

“Women coming to us today are attracted by our intentional focus and relationship with the poor, and by our emphasis on issues of social justice and our efforts to [bring] about systemic change,” explained Sister Sharon, vocations director for the Sisters of Charity, where there are currently three women in the early stages of formation. “Women find a joyful spirit and sense of hope in that mission.”

“We attract women who are called to an apostolic community, meaning we recognize that our works and communal life flow from our relationship with God,” she added.

Currently, there are three women in formation with the Benedictine Sisters in Atchison, where the ministries the Sisters do are varied — but the focus is the same: “Ora et labora,” Latin for “prayer and work.”

“Our community centers on praying the Liturgy of the Hours in community with each other, following the 1500-year-old monastic tradition started by St. Benedict,” said Sister Suzanne. “We balance that with our work, paying particular attention to work with women, especially the poor.”

No matter which religious order a woman ends up joining, the vocation directors say it is their job to simply help a woman discover where God is asking her to go.

“The focus is on where God is calling each of us, and that involves purposeful thinking, prayer and discussion, as well as learning more about how our skills, resources and experiences fit with the charism of a given order,” said Sister Suzanne. 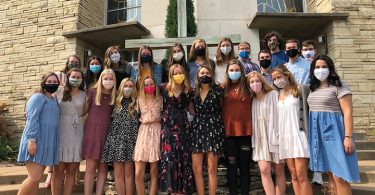