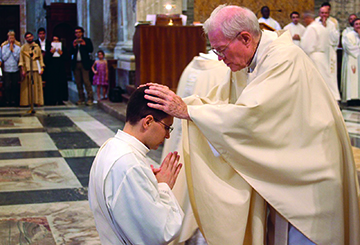 KANSAS CITY, Kan. — Just how hard is it to reserve one of the four major, ancient basilicas of Rome for your priestly ordination?

Not hard at all, discovered Father Alessandro Borraccia, AVI.

Father Alessandro was ordained a priest for the Archdiocese of Kansas City in Kansas on June 23 at the Basilica of St. Paul Outside the Walls.

It didn’t take special connections or a friendly word from a high-ranking prelate.

“It was way easier than you think,” said Father Alessandro. “I just called the [Benedictine] abbot and asked him. I explained that I was being ordained, and he said, ‘You can come and do it. We don’t have any other commitments.’”

It was only fitting that Father Alessandro, a member of the male branch of the Apostles of the Interior Life, should be ordained a priest over the bones of St. Paul. After all, the apostle played a major role in his priestly vocation.

Father Alessandro went on retreat for two days before his ordination at the Trappists’ Fontane Abbey, known as the “Three Fountains Abbey.” The legend is that when St. Paul was beheaded there, his head bounced across the ground three times — and miraculous springs issued forth at each spot.

“St. Paul has been so close to me,” said Father Alessandro. “I chose for my holy card the quote from Second Corinthians, verse nine: ‘My grace is sufficient for you, for power is made perfect in weakness. I will rather boast more gladly of my weaknesses in order that the power of Christ may dwell with me.’”

Father Alessandro, from a suburb of Milan, Italy, discerned his vocation to the priesthood during the fall of 2005 at the St. Paul University Catholic Center at the University of Wisconsin-Madison.

Father Alessandro never thought about becoming a priest. He came to America to earn a doctorate in industrial engineering and launch a rewarding career. All that changed in Madison.

“I met one of the Sisters of the Apostles of the Interior Life, Sister Tiziana Mazzei,” he said. “Through her friendship, through her testimony of being a joyful person in love with the church and Christ, I had this intuition that whatever she was telling me had deep meaning and made sense.”

He wanted that joy, that deep meaning — he wanted more. He slowly acquired a deeper peace and joy in his heart. People started noticing that he was changing even before he realized it himself.

He went back to Italy in December 2006, set his secular prospects aside, and joined the Apostles of the Interior Life in January 2007.

Father Alessandro was the only priest ordained at the basilica that day. Space immediately in front of the altar was roped off for those attending the ordination Mass, but tourists still wandered in and out of the doors at the entrance to the church at the back.

Approximately 400 people attended the ordination, which had an international flavor. Lots of people from Rome attended, but also 50 from Milan and several individuals from southern Italy and other places. Guests included priests from Rome, other dioceses in Italy, several European countries, African nations, the hidden and persecuted church in China, and two priests of the Greek-Byzantine Catholic Rite.

There were also 50 Americans present for the occasion, in Italy for both the ordination and a pilgrimage. The American clergy included Father Stephen Sotiroff, chaplain to the Apostles, from the Diocese of Springfield, Ill., and Msgr. Michael Mullen, who represented the Archdiocese of Kansas City in Kansas and vested Father Alessandro. Msgr. Mullen is pastor of St. Patrick Parish in Kansas City, Kan., and co-director of seminarians for the archdiocese.

The Americans were led by Apostles of the Interior Life Sister Susan Pieper, Sister Debbie Li and Sister Loredana Mazzei.

The ordaining minister and homilist was Archbishop Salvatore Fisichella, president of the Pontifical Council for the New Evangelization.