by Marc and Julie Anderson
mjanderson@theleaven.org

That’s what Topeka Hayden High School senior Brooklyn Hunter wore one of the first times she picked up a tennis racket.

It’s an image forever seared in the minds of Shane and Tina Hunter, Brooklyn’s parents, in part because Brooklyn, who was just 3 at the time, has continued to play the game. 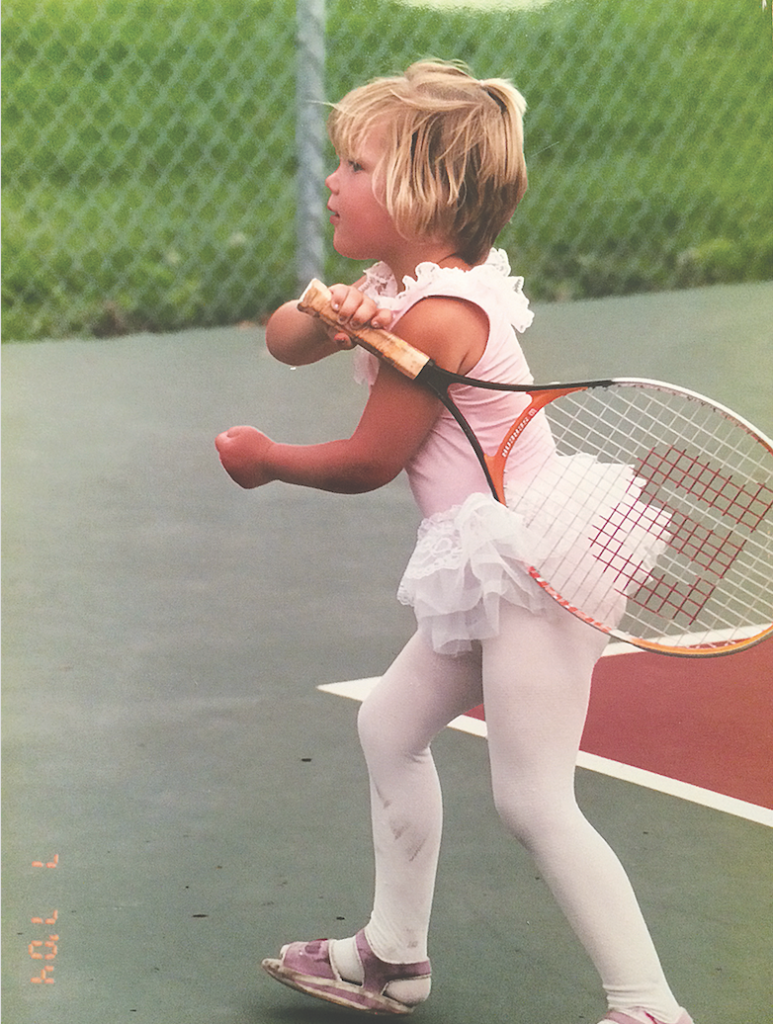 It’s also an image that was on the signs many of Brooklyn’s family, friends and classmates held on Oct. 15 at the Kossover Tennis Center in Topeka as they cheered on Brooklyn to her fourth consecutive state championship in class 4A tennis singles, capping off a season record of 20-1 and an overall high school career match record of 78-2.

Earning one state championship is an amazing feat in itself, let alone four. The accomplishment puts Brooklyn in an elite class. She is only the second player in class 4A history to lay claim to four consecutive titles — but not the first in her family.

Her older brother Tommy did the same just one day before his high school graduation in 2016. Brooklyn said her brother’s guidance and support was immeasurable.

“First of all, he told me to just try and enjoy it as much as I could because, obviously, there’s a lot of pressure,” she said.

“He was pretty much one of my coaches over this past season,” Brooklyn added.

The week after the city tournament, her older brother took her aside and simulated a variety of situations she would encounter on her way to the state title, including being behind in games and sets, the placement of television cameras and the championship point itself.

“He wanted me to be prepared,” she said. “That way, when I was in that particular situation, I had already faced it and wasn’t as nervous.

“That helped me more than I ever thought it would.”

Besides her family, Brooklyn enjoyed the support of her coach, Christy Sheetz, and others.

And it’s that support that’s made her successful, said Sheetz.

“She seeks out the advice of others, and she listens carefully, especially the advice from her family and brother Tommy,” she said. “She leans heavily on her parents and siblings, knowing that they want what is best for her.

“The love the Hunter family has for her and each other is visible and incredibly supportive,” she added. “And after winning the first two rounds at state on Saturday, she didn’t go home to rest.

“They went to evening Mass together.”

Despite weather delays of rain and a rare October snow, the bleachers for the tournament were full of Hayden supporters.

“It was a great turnout. It was crowded. For a tennis tournament, it was very crowded. There were a lot of fans.”

As a member of Christ the King Parish in western Topeka, Brooklyn’s upbringing has included more than 12 years of Catholic education — first at the parish grade school and then at Hayden, the city’s only Catholic high school.

Brooklyn said her Catholic faith and values helped her on and off the court as she coped with the pressure of being the premier singles player in class 4A, especially as the championship match got closer.

“I was praying the morning I had a tournament,” Brooklyn said, and often prayed during her matches.

It was her mother who introduced her four children — of which Brooklyn is the youngest — to tennis. She never dreamed two of her children would become four-time state champions.

“I was just trying to teach them eye-hand coordination,” she said.

Still, Tina admits watching her youngest child become a state champion was incredible. It brought back memories of a little girl in a pink tutu, especially as she saw the signs held by the fans.

“I have to admit, it was pretty special,” she said.

Freelancers Marc and Julie Anderson are long-time contributors to the Leaven. Married in 1996, for several years the high school sweethearts edited The Crown, the former newspaper of Christ the King Parish in Topeka which Julie has attended since its founding in 1977. In 2000, the Leaven offered the couple their first assignment. Since then, the Andersons’ work has also been featured in a variety of other Catholic and prolife media outlets. The couple has received numerous journalism awards from the Knights of Columbus, National Right to Life and the Catholic Press Association including three for their work on “Think It’s Not Happening Near You? Think Again,” a piece about human trafficking. A lifelong Catholic, Julie graduated from Most Pure Heart of Mary Grade School and Hayden Catholic High School in Topeka. Marc was received into the Catholic Church in 1993 at St. Paul Parish – Newman Center at Wichita State University. The two hold degrees from Washburn University in Topeka. Their only son, William James, was stillborn in 1997.