KANSAS CITY, Kan. — It may not seem like a lot to you, but to a group of seven- and eight-year-olds, $200 dollars is a serious pile of cash.

This $200 was half of what 10 Brownies of Troop 717 at St. Michael the Archangel School in Leawood earned through their cookie sales.

The Girl Scouts could have blown the whole wad and more on some fun field trip for themselves, but they didn’t.

“They kind of reached the conclusion on their own, and it was pretty cute to watch a bunch of seven-year-olds say, ‘Wait, there are probably homeless people in Haiti who need our help now,’” she continued. “They were able to collaborate as a group and reach an agreement.”

At first, the girls wanted to send toys or books, but their leaders had to talk with them about what it meant to lose everything.

“I think that was a very eye-opening [exercise] for them,” said Kopecky. “Their basic needs have always been provided for, so they’ve never had to think about the most basic needs. We do toy drives or stocking food kitchens, but we haven’t thought [about] being hungry for the next meal and not having basic supplies to get through the next day.”

The Brownies will use their money to buy personal care items, including soap, toothpaste and toothbrushes, washcloths, and combs. Next month, they will use these items to assemble personal care kits, which will be given to the international relief organization Heart to Heart.

For many children attending our archdiocesan schools, the Haitian earthquake is the biggest disaster they have ever heard of, so Haiti has constantly been on their minds. It’s not surprising, therefore, that many of them have not only been praying for the Haitians, but also doing practical things to aid relief efforts, Kopecky said.

What follows is not an exhaustive list, but a sampling of what students at Catholic schools in the archdiocese are doing to help the Haitians.

It doesn’t matter that the three girls from Bishop Miege High School in Roeland Park haven’t been to Haiti and likely never will.

The disaster touched their hearts, and that’s all the kinship connection they need. That’s why they formed “Teens for Haiti.”

“At school, everyone wears wristbands,” said Ellen. “You can’t really wear anything else [to be expressive], like T-shirts. Wristbands are universal, and since the ‘Live Strong’ bands were so popular, we thought they would be popular for Haiti, too.”

The bands, which sell for $2, say “Teens for Haiti” and “One World, One Love.” They sold more than 200 the first day they were offered, and the girls are distributing the wristbands to other nearby Catholic high schools, hoping to spark a trend. So far they’ve sold 245 and raised about $470. The money will be donated to Catholic Relief Services.

High school students don’t have a lot of money, but they can do a lot of good with the small amounts they have, the girls said. It’s important to help any way they can.

“They’ve had a huge disaster, and half their country is in ruins,” said Ellen. “We should help. I think it’s good to give, because they are a really poor country in the first place. Other human beings are suffering and we should help them.”

“I think every person has the same right to live,” said Nina. “I think sometimes we don’t appreciate what we have in life, so we should give something back to people in need.”

Anyone interested in donating or purchasing wristbands may do by sending an e-mail to: teens4haiti@gmail.com.

I get a kick (and cash) out of you

Some of the classic games of grade school days — Wiffle ball, dodgeball, and kickball — are making a comeback.

Seeing the popularity of these games, Erin Doherty had a brilliant idea: Why not use one for a fun fundraiser to help Haiti?

That’s how Erin, a junior at St. Thomas Aquinas High School in Overland Park, and her mother Julie came up with “Kickin’ It for Haiti.”

“We reserved (Lenexa’s)Holy Trinity gym for one night, and I got a whole bunch of teenagers to attend for a $30 minimum donation,” said Erin.
“We had door prizes; it was a lot of fun. We played kickball, dodge ball,
and tag.”

More than 40 high school youths showed up, and a hearty 20 stayed until 6 the following morning. All totaled, the event raised $1,300.

“We gave the money to a teacher at Holy Trinity, Sarah Cretors,” said Erin. “She is collecting money that can be used to put meals together for Youth-front.”

Erin estimates that the funds she raised will pay for approximately 6,500 meals. The meals, which were packed last week, included basic staples like rice, beans and protein supplements.

“We’re packaging food; we’re just putting together a basic meal, so all they have to do is add hot water and they’ll get their vegetables, grains and vitamins. These meals are [badly] needed,” said Jay Brann, a junior at Shawnee Mission Northwest High School and a member of Holy Trinity Parish.

What’s not to like at a bake sale? Or better yet, a bake sale for Haiti?

The five-member, student-run Religious Affairs Committee at Christ the

King School in Kansas City, Kan., brain-stormed ways to raise money for Haiti. Ideas that didn’t make the cut — because it’s winter out there — were washing cars, mowing lawns, and walking dogs.

Then, they had a great idea: a Valentine’s Day bake sale. It raised about $155, which was donated to Catholic Relief Services.

“I think the whole school and parish were really struck by the disaster, and it really took us by surprise,” said Audrey Kump, committee chairperson. “We thought that this [fundraiser] would bring the whole parish together.”

Help from all over

Several schools and individuals have raised funds — not only for the initial response to the disaster, but also for long-term recovery. Among those who’ve helped are:

• The eighth-grade class of Ascension School in Overland Park, who raised funds through its annual Mardi Gras parade on Fat Tuesday, Feb. 16. The school began holding these parades five years ago to help the people of New Orleans following Hurricane Katrina. This year,

the monies raised went to help New Orleans and Haiti.

• Forty members of the youth group at Church of the Ascension Parish in Overland Park, who, in conjunction with the Youthfront ministry, packed more than 5,000 meals on Feb. 14. The meals will be sent to Haiti through Feed the Hungry.

• Fifth-graders at Xavier Elementary School in Leavenworth, who held a “jeans pass” fundraiser in January soon after the disaster struck. They designed the pass themselves and invited the whole school to participate. Students were able to wear jeans all day after buying a $5 pass. The school raised almost $2,400.

• Fifth-graders at Holy Trinity School in Lenexa, who voted to donate money they raised during their annual Ash Wednesday read-a-thon to Catholic Relief Services to aid Haiti. In the past, the student donated the funds to Community LINC and Safehome. 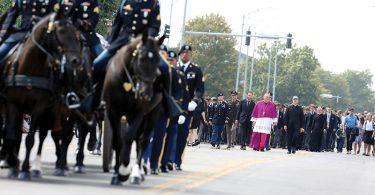