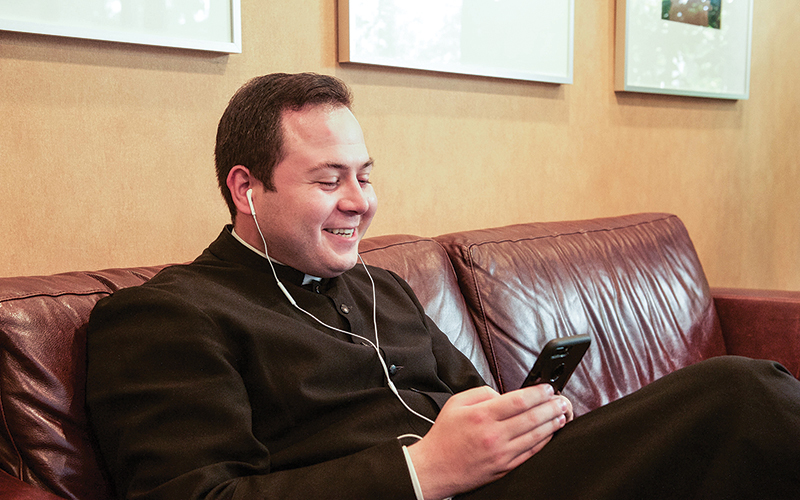 Father Anthony Saiki listens to songs on his iPod. Father Saiki has a wide variety of musical genres on his iPod but loves a good movie soundtrack. PHOTO BY MOIRA CULLINGS

OVERLAND PARK — If Father Anthony Saiki’s life had a soundtrack, it would sound a lot like the scores in famous epic movies like “Star Wars” and “The Lord of the Rings.”

“I could listen to any one of those movie soundtracks and get pumped up when I’m going to hear confessions or give a talk,” he said, smiling.

It’s movies and music with a deeper meaning that bring joy to Father Saiki’s downtime.

“I really enjoy connecting with elements in the film,” he said.

Father Saiki admits that he approaches movies more like a film critic than an average moviegoer.

And one of the most important elements to any film, he believes, is its soundtrack or score.

“Those can actually make or break a movie for me,” he said.

“I see each movie as this symphony of moving parts, all working in harmony to present a story. And I just enjoy that very much,” he added.

Although he finds it difficult to name his favorite movie, Father Saiki has a particular interest in sagas.

“Star Wars,” “The Lord of the Rings,” and any of the Batman movies are probably his top three, he said.

And when it comes to music, Father Saiki has a very eclectic taste.

“I actually have a bit of every genre in my iTunes library,” he said.

His favorite composer is Hans Zimmer, and, as far as vocals go, nothing beats a little Josh Groban.

Father Saiki is also a fan of Spanish guitar, and believes “you can’t go wrong with the ’80s.”

He will indulge in a little bit of country every so often, and, although his pop phase hit its peak during his high school years, he still enjoys the genre now and then.

The love Father Saiki has for these hobbies is, in part, influenced by his younger brother Matthias.

“We both have a very similar taste,” he said.

As the oldest of 10 siblings, Father Saiki enjoys living close to his family’s home in DeSoto, where he visits on his days off to enjoy his hobbies with loved ones.

But these interests serve as more than entertainment for the priest.

“I listen to music all the time — in the car or sometimes even writing homilies,” he said. “There was one time I was stumped on a homily and I was playing ‘It’s Tricky’ and actually it broke whatever writer’s block I had.”

But more than anything, movies and music are a source of inspiration for Father Saiki.

“There are so many times in my life where I face challenges or temptations or trials,” he said. “I really am basically fighting evil, and it can come in many different forms.”

Having characters to relate to is often a great help.

“There’s elements where it’s encouraging that, even from a secular or a less Christian arena, there can be such inspiring stories of good versus evil and how good triumphs over evil,” he said.

Moira attended St. Thomas Aquinas High School in Overland Park and Benedictine College in Atchison. She majored in marketing, minored in psychology and played center midfield for the women’s soccer team. Moira joined The Leaven staff as a feature writer and social media editor in 2015. After a move to Denver in 2018, Moira resumed her full-time position at The Leaven and continues to write and manage the website and social media channels. Her favorite assignment was traveling to the Holy Land to take photos for a group pilgrimage in 2019.